While you’ll commonly see them across gardens, parks and in woodlands all over the world, people still feel that spotting a squirrel is something pretty special. They’re quick movers and are famously pretty shy – but get up close, and you’ll find that there’s plenty you can learn about these literally nutty critters. Here’s 15 interesting facts about squirrels to help clue you in. 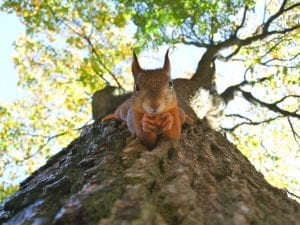 Do you have any interesting or fun facts about squirrels?  Share them here in the comments section below!