Pigs are more than just sources of bacon!  If anything, they are some of the most interesting animals we share the planet with. More than just swill-guzzling pink porcines, these grunting geniuses may well surprise you.  Here are 17 fun facts about pigs which you may not be aware of… 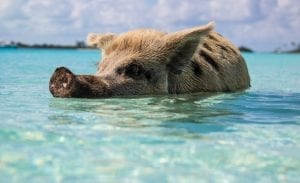 Do you have any interesting or fun facts about pigs that we’ve missed?  Share them here in the comments section below!