Times Square is likely to be one of the most iconic locations in the whole of New York City, if not the entire state!  Known to many as the ‘crossroads of the world’, it’s a popular location for businesses as well as for revellers, particularly given the fact that there are big New Year’s Eve celebrations which take place here each year.  But how much do you really know about Times Square, NYC?  Here’s a full fact file to give you a rundown of what makes this district tick – no pun intended! 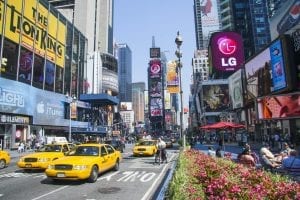 Do you know any interesting or fun facts about Times Square?  Share them here in the comments section below!